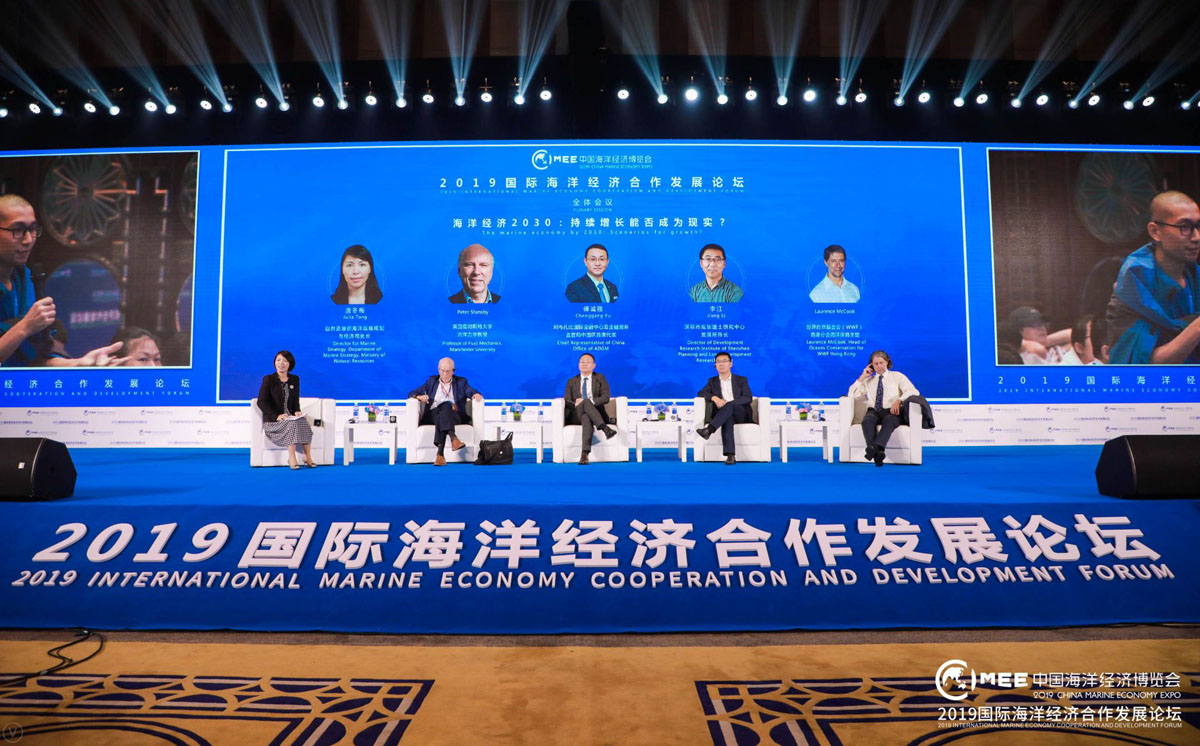 THE 2019 International Marine Economy Cooperation and Development Forum, a highlight of the 2019 China Marine Economy Expo, was held yesterday at Sheraton Shenzhen Futian.

The two-day forum, aimed at mapping out the future of the blue economy, attracted over 70 prominent thought leaders for strategic discussions on how to utilize, understand and protect the world’s marine resources.

Shenzhen Vice Mayor Wang Lixin said in his opening speech that Shenzhen is poised for progress, and this forum will help leverage its position to boost cooperation in the global marine economy.

Claude Smadja, president of Smadja & Smadja Strategic Advisory Inc., said at the opening ceremony that he is glad to be part of the team organizing this event.

“Truly, the purpose of the forum is to understand how we can accelerate growth in the marine economy in the context of resource and environmental sustainability,” said Smadja.       “International marine cooperation is crucial — not only for feeding people, not only for fighting climate change — but for the future of mankind.”

Relevant data showed that the total GDP of Shenzhen’s ocean economy in the first half of the year was 122.9 billion yuan (US$17.4 billion), up 6.3 percent year on year, accounting for 10.1 percent of the city’s total GDP in the first six months this year.

At present, Shenzhen is ramping up efforts to become a global marine-centered city.

Luisa Rodriguez, economic affairs officer with the United Nations Conference on Trade and Development, told the Shenzhen Daily that in her eyes partnership is key to Shenzhen achieving this goal.

“Building partnerships not only with governments of different countries but also with research institutes and businesses is important,” said Rodriguez.

Dilip Sarangdhar, technical director with SeaTech Solutions International (S) Pte Ltd., shares a similar sentiment when it comes to how Shenzhen can speed up the process of becoming a global ocean-centered city.

“I think cooperation, dialogue with the international world is the most important thing, which is exactly what I saw here in Shenzhen,” said Sarangdhar.

Sarangdhar told the reporter that this was the first time that he came to Shenzhen, adding that “I am really impressed by this event and organizers. I wish I had come before. I wish to find business partners in Shenzhen.”

Digitalization, artificial intelligence, cloud computing and many other advanced technologies were highlighted for the health and wealth of the blue economy at a plenary session held after the opening ceremony of the forum.

During the session, Eric Yin, vice president of SAP China, mentioned the role of cloud platforms and cloud services in ensuring the quality and good engineering of offshore projects.

Yin believed that new technologies are the best methods for integrating industrial chains. According to Yin, as the marine industry covers the longest industrial chain, from ocean to land and equipment manufacturing to biochemistry, the function of advanced technologies is self-evident.

Rodriguez observed that technology will play an essential role in reducing the cost of building marine ecosystems in the long run.

“So Shenzhen should also make full use of its innovation strengths in science and technology for a long-term marine economy development,” said Rodriguez.

The expert panel detailed how the complexity of the marine industry makes it essential for major companies, government institutions and academia to collaborate on the use of artificial intelligence, automated vessels, cloud computing and integrated sensors.

The forum is hosted by the Ministry of Natural Resources and the Shenzhen Municipal Government.