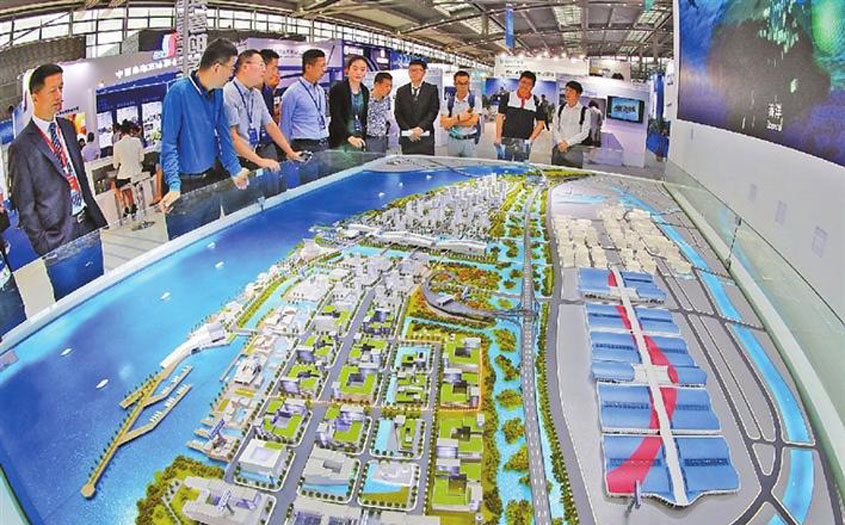 Visitors watch a sand table demonstration of the plan for the Shenzhen New Marine City at the ongoing 2019 China Marine Economy Expo at the Shenzhen Convention and Exhibition Center yesterday. Sun Yuchen

ONE of the city’s 12 projects to achieve its goal of becoming a global center of ocean-based industries by 2035, the plan for Shenzhen New Marine City made its debut at the 2019 China Marine Economy Expo, which will wrap up today.

The project, to be located at the east side of the estuary of the Pearl River and in proximity to the newly built Shenzhen World Exhibition and Convention Center in Bao’an District, covers an area of 7.44 kilometers, according to the layout released by the city’s urban planning and land resources committee.

It aims at building an industrial cluster of marine businesses worth hundreds of billions of yuan in the future.

As a key project in the Greater Bay Area, it is expected to lead the development of the marine industry in the area. It will become one of the four marine industrial hubs in Guangdong. The other three are the Binhai Bay New Area in Dongguan, Nansha District in Guangzhou and Cuiheng New Area in Zhongshan City, according to the plan.

In August, the Central Government unveiled a detailed guideline on supporting Shenzhen in building a pilot demonstration area of socialism with Chinese characteristics. It was stated in the guideline that Shenzhen is supported in building itself into a global ocean center.